....oh, where to begin?!  We are wrapping up the main season of 2014 (of course, we are always here to continure to welcome our off-season guests as well!) and what better way than to give a little recap of our 4th annual Food & Wine Tour of Umbria with Ciao Thyme of Bellingham, WA.

Every year we try to do the seemingly impossible and out-do the previous trip, and yes, we achieved this goal yet again!  More food!  More wine!  More Umbria!

Note to those searching for Il Bacco Felice...

Unfortunately Il Bacco Felice in Foligno has been closed indefinitely.  Please feel free to contact me for further information.

The Year in Review...

Pick up you September issue of Food & Wine and read this article (or just read it here online). This is where I have been working for the past few months. I was there when the author wrote the article, so I guess I would be considered "the peer." Its a little strange that she describes it as New Trattoria Cooking, since Salvatore has been running the place for 20 years, and trust me, there is nothing new about anything there...except to maybe give you a new glass of wine... ;-) 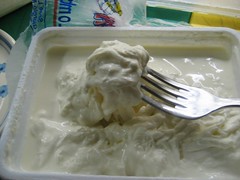 Stracci di Mozzarella
Originally uploaded by jennifermcilvaine
Salvatore got this special Mozzarella from Puglia the other day, called Stracci di Mozzarella. Its is the cheese in the second stage of mozzarella making - before it is shaped into balls. Must be eaten within 24 hours - not a hard task!

a word about favas...

I got my first mosquito bite the other day, which means that spring is coming to an end, and summer is here. But I realized that I never had a chance to write anything about my favorite spring vegetable: the fava bean. The favas here in Umbria are excellent, and everyone eats them all spring. The most poplular way is just to eat them raw (in the shell) with spring pecorino - at Il Bacco Felice, Salvatore would just pass around a basket of favas from his garden still in the pods - that's the way to do it! Also, even though the favas here are about twice as big as anything I've ever seen in Seattle, they are completely tender and sweet - no wonder they don't want to cook them! We did make a fantastic spring soup with favas (unpeeled), artichokes, english peas, spring onions, and asparagus tips. When it was finished it had that classic brownish-over-cooked-italian-vegatable look, but, I have to admit that the tast was incredible!
I did break down one day, and cooked and peeled all of my favas - I was making fava puree for bruschetta, inspired by my days working at the Boat Street Cafe last spring with Renee...for some reason while peeling the favas, I instantly started craving a glass of Rosé...why could that be, I wonder???
But what's missing in this picture of spring? Morels. Morels are virtually non-existant in Umbria, and its a shame because there is nothing better than favas cooked with spring garlic and morels...maybe next year... 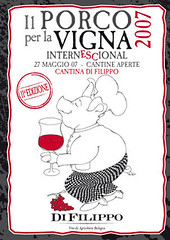 Porco2007.jpg
Originally uploaded by jennifermcilvaine
...or more Gucci, Louis Vuitton, and Fendi than you can shake a stick at! No, Cantine Aperte is not a handbag fashion show, but rather a day when wineries from around the world open their doors and hold picnics, concerts and tastings - more like drinkings. Needless to say its a really fun day!
We started celebrating Cantine Aperte at our house on Saturday night - with dinner on the patio. We made proscuitto with melone, melanzane with a salsa of spring onion, chopped egg, tomato, caper, and raisins, mint and basil, spinach and walnut salad, panzanella salad, and paccheri with zucchini blossoms and tomato. After dinner, we headed over to the cantina of Arnaldo-Caprai, where a concert of music from the 50's and 60's kicked off the festivities.
The next morning, I had to go back to Caprai to work with Salvtore. Every year Caprai holds an event called Mangialonga with 4 posts in various parts of the estate (the 1500 participants end up walking about 3 km) for eating and drinking the wines of Caprai. Il Bacco Felice is always the 1st post with Salvatore's famous Panzanella Salad.
So after I picked about 100 bunches of basil, we headed over to Cantina Di Filippo, an organic wine producer in Cannara. They had a great event featuring pork cooked in different ways from around the world: Brasil, paired with Greccheto; Japan paired with Rosato; and Argentina, paired with Sagrantino; followed by roccetti, typical Umbrian biscotti paired with Vernaccia. All of the dishes were really great, and actually tasted like their country of origin...but of course, we are in Italy, so instead of serving the dishes with rice - especially the Brazillian and Japanese, they had bread - so close! Surprisingly, the Japanese pork was the biggest hit - people were going back for seconds. Italians tend to be very wary of all Asian cuisines, and except for major cities like Milan or Rome, foods other than the traditional regional cuisine are few and far between. And as much as everyone liked the Japanese pork, no one could touch the teaspoon of wasabi that accompanied it - they thought I was crazy for eating it. Oh well, baby steps...
Two wineries is enough? No way, after the late summer rain shower passed (its may, but its been hot like august here), we took a coffee, and then went to Cantina Scacciadiavoli. There we drank a little Montefalco Rosso and drank a lot of water from their spring. One last stop at Cantina Benincasa for one last sip of Sagrantino Passito. They get my award for best t-shirt logo.

Promote Your Page Too